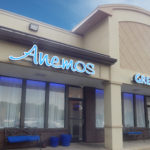 Bessy was born and raised in Thiva, Greece. As a young girl, she would help her mother pick fresh vegetables and herbs and feed the farm animals, from which she would gather fresh eggs and milk daily.  From a young age she always had a passion for cooking and learned traditional Greek cooking from her family members. Some of her favorite dishes to prepare are Pastichio and Mousaka.

Bessy met her husband, Chris, and moved to New Jersey where they opened their first restaurant, Colonial Coffee Shop in Fords, NJ. This is where they put their love and passion for cooking into their reality. It was always their dream as husband & wife to own a restaurant. The Colonial Coffee Shop became known as the “Home of the 10 cent cup of coffee” in the early 80’s and was voted as best breakfast in Middlesex County. They owned the Colonial Coffee Shop for 25 years. They also opened Christos Pizza & More and The Millenium Restaurant in Woodbridge, NJ.

In 2008, they decided to move to Manalapan, where they took over Gus’s Restaurant located on route 33 in Manalapan. It is a family owned restaurant providing a wide variety of delicious food and a place that Bessy calls home. It has always been Bessy’s dream to open a Greek Restaurant to display her Greek roots, heritage, culture, and family recipes. In 2015 She partnered up with her daughter, Helen, in making this dream a reality and opened Anemos Greek Cuisine. 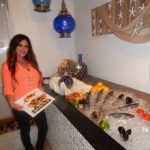 Helen Arvanitis comes from a strong Greek heritage and culture, her family is from Thiva, Greece. She was born into a family of restaurant owners with over 40 years experience and has been involved in the family restaurant business since she was a young child.  She managed a few of her families businesses including Colonial Coffee Shop and Christos Pizza & More. She has always been a responsible, motivated leader.

Helen graduated from Seton Hall University with a BA in Education and a Masters Degree in Professional Development. Teaching is her passion, she has been a teacher since 2001 teaching various grades including first, second, and fourth grade.  In 2015 she decided to take her creativity to a different level and open her own Mediterranean Restaurant. Using her knowledge and expertise that were instilled by her parents, she wanted to offer a restaurant that offered a lighter, more modern twist on Greek food. With traditional recipes from her family she opened Anemos Greek Cuisine. The restaurant décor is inspired by her two favorite Greek islands Mykonos and Santorini. She loves bringing you creative and delicious recipes that inspire your palette.

Reservations are not required, but are advised especially on weekends, holidays and for parties of 4 or more.

We offer catering for any event. Whether you would like to entertain a select group of clients, or host a reception in the restaurant, we offer a number of party possibilities. To request more information please email us or call (732) 414-6590.

Only 2 weeks away until Christmas Eve!!! Hurry, ma

Fresh seafood is our motto!! This combo of jumbo p

Sundays are for steak 🥩 dinners and your favori

The holidays are approaching quickly, book your pa

Have you made your reservations yet for LADIES NIG